The activity rate indicates the percentage of population who is working or looking for a job when compared with the total number of people of the same age.

The activity rate in the third quarter of 2018 among young people aged 16 to 29 in the Autonomous Community of the Basque Country is 48.3%; in other words, if we add young people working to those looking for a job we will see they are less than half, so it is easy to suppose than the majority are students (although some of those people are housewives and househusbands, people looking after dependent relatives, there are also disabled people or people who have finished their studies and are not looking for jobs at the moment).

On the other hand, the employment rate indicates the percentage of employed persons when compared with the total number of people of the same age. Youth employment rate also declined since 2007 to 2012 but it has been increasing continuously since 2013.

What does it mean? It means that there are less young people unemployed but also less people available to work.

The purple area of the graphic that is between activity line and employment line indicates the percentage of young unemployed people. This is what Eurostat, the statistical office of the European Union, denominates “youth unemployment ratio”, which is different to unemployment rate because the ratio is calculated based on total population and the rate is calculated based on active population.

The main figures of unemployed young people were registered in the period between 2013 and 2015, where more than 14% of total population aged 16 to 29 was unemployed.

The yellow area in the upper part of the graphic (over the line that marks activity rate) indicates the percentage of young people who is out of the labour market, i.e. they do not work neither look for a job. Most of them are students who study as a strategy to improve their employability.

In 2017 and 2018 we can find the main figures regarding young people out of the labour market in the last decade. 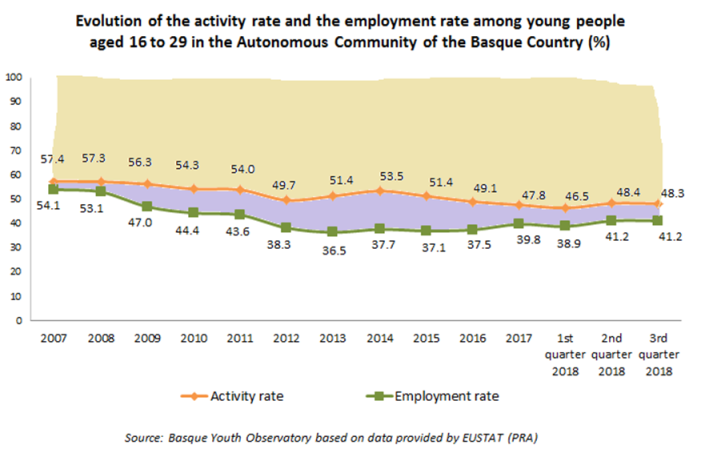 These data come from the Population in Relation to Activity Survey (PRA) for the third quarter of 2018. The PRA is prepared on a quarterly basis by the Basque Statistics Institute (EUSTAT) and provides the Basque Youth Observatory with data relating to the population aged 16 to 29 so that the Observatory can analyze the situation of the youth.