Law 4/2005, of 18 February, on the Equality of Women and Men, defines violence against women as "any act of violence on the basis of sex that results, or is likely to result, in physical, sexual or psychological harm or suffering to women, including threats to commit such acts, coercion or the arbitrary deprivation of liberty that may occur in public or in private".

In addition, the answers given by young people in 2016 were compared with those obtained in 1997 to study the evolution of young people views on this social issue. 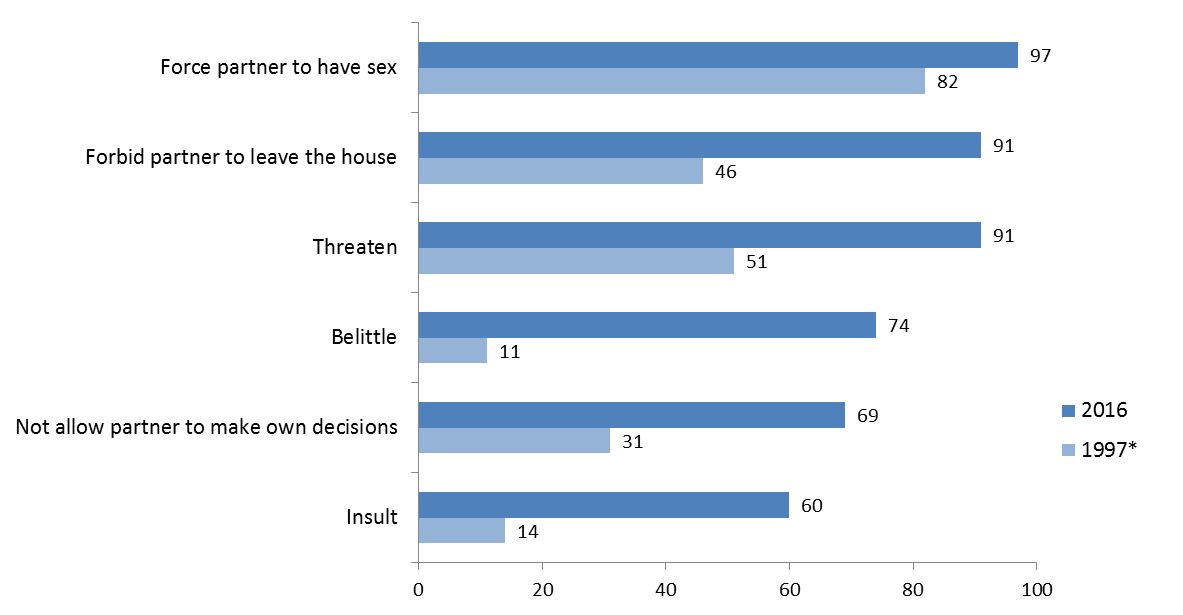 In 1997 only 11% of Basque youth regarded belittling your partner as very serious. That figure increased to 74% in 2016.

Not allowing your partner to decide on things was considered very serious by 31% of Basque youth; however, in 2016, that percentage rose to 69%.

Finally, insulting your partner was considered to be very serious by 60% of Basque youth in 2016; a figure that in 1997 only reached 14%.

If we focus on the data from 2016, we see that among young women the percentage of those who considered each of these forms of violence as very serious was somewhat higher than among young men. The greater the severity of the conduct, the smaller the difference between the two groups, i.e. there is near unanimity among young women and men regarding the gravity of forcing the partner to have sex, but not so much when we refer to less radical forms of violence, such as insults, belittling or not to letting women make their own decisions.

On the other hand, as age increases, so does the percentage of people that find all the forms of violence proposed very serious. As happens with the differences between men and women, the less radical forms of violence, such as insults or not allowing women to make their own decisions, display the greatest differences and, what is more worrying, younger people see them as even less serious.

Young people who considered each one of the forms of mistreatment proposed as very serious in 2016, based on sex and age groups (%)

These data come from the Basque Youth 2016 Study. This is a series of studies that the Basque Youth Observatory conducts every four years based on a survey of a representative sample of Basque youths aged 15 to 29. The sample consists of 1500 young people (750 men and 750 women) who are asked about various current topics.