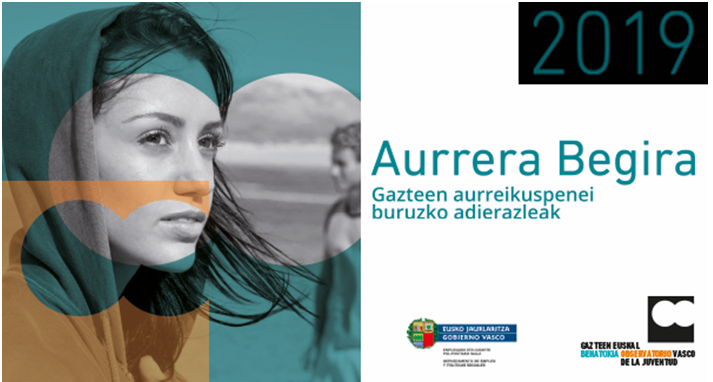 1540 young people were interviewed in November and December 2019

For seven years now, the “Aurrera Begira” (Looking forward) study has been analysing how Basque youth perceive the present and their short-term expectations for the future.

This study was designed as a concise instrument to assess the evolution of the issues that most concern young people: their careers, the possibility of becoming independent in the short term, or the need to migrate to find a job.

The study has been conducted every year since 2013 and, as in previous editions, the fieldwork was carried out between November and December 2019 by means of a survey of 1540 young people aged 15 to 29.

The results of the “Aurrera Begira” study are based on 10 indicators. The first three indicators focus on the assessment of the present from various points of view: individually and as members of a group.

Then, four indicators that focus on job prospects are assessed:

Finally, two indicators focus on expectations for the future:

The current assessment index, which not only takes into account the personal situation but also that of young people in general or the situation of the Basque Country as a whole, has reached the highest level in the series (70 out of 100) and is ten points higher than the value recorded in 2013 when the first ratings were taken (60).

The personal satisfaction index is even higher, 78 points, and has proved to be extremely stable throughout the series of studies. To calculate it, young people are asked to assess their level of satisfaction regarding 10 aspects of their life and then the average is calculated. These aspects are health, family, friends, work, studies or training, free time, emancipation, sentimental and/or sexual relationships, money and, finally, physical image.

It is precisely the satisfaction with these aspects compared to the importance they attach to each of them that gives us the third indicator called the balance of vital aspects. Health, family and friends are, in this order, the aspects to which young people attach the greatest importance and with which they are most satisfied. On the other hand, employment and money are the issues with satisfaction levels that are lower than those of importance.

Employment-related indicators have played a major role in improving the current assessment index. Although the risk of job loss or insecurity still affects one third of working youths, this index has fallen by 23 points since 2013.

Among students, the education-job match expectation has increased from 46% to 74%.

Furthermore, among young people in general, the expectation of forced migration abroad in the future to work has halved, from 16% in 2013 to 8% in 2019.

On the other hand, the expectation of failed emancipation, which refers to a desire to become independent from the family home within one year and not being able to do so, shows the lowest figure of the series and has dropped from 45% to 40% in these seven years.

Basque youth define themselves as well educated, qualified, hard-working and responsible. Other characteristics such as idealistic, autonomous, participative and entrepreneurial are features that they feel they have to a lesser extent. From all these assessments, we obtain the confidence index regarding the capabilities of young people, which stood at 66 points out of 100 in 2019.

The positive assessment of the present has also resulted in a more optimistic perspective for the future. The confidence index regarding the future, which measures expectations regarding their personal situation in the future, the situation of young people and of the Basque Country in five years’ time, has increased five points when compared with 2013, and stood at 69 out of 100 in 2019.