According to data from the latest Basque Government Health Survey conducted between 2017 and 2018, the breakdown of young people aged 15 to 24 based on their Body Mass Index is as follows: 8.9% are underweight, 78.1% have a normal weight, 11.1% are overweight, and the remaining 1.9% are obese.

The Body Mass Index (BMI) is considered to be a determining factor of a person’s health and it is calculated by dividing a person's stated weight (in kilograms) by their height (in metres) squared. 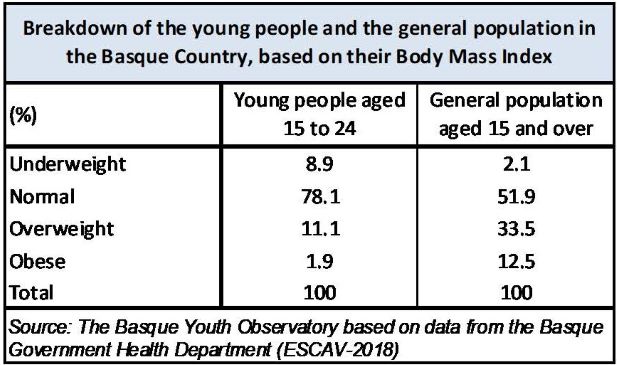 Indeed, if we compare the data on young women and men in the Basque Country, we find that a higher percentage of women are underweight while a higher percentage of men are obese. However, this index does not distinguish between muscle and fat mass. Consequently, sportspersons and muscular people score higher on this index even if they are not physically obese, a situation that is more common among men.