When purchasing a product, 16% of young people in the Autonomous Community of the Basque Country usually asked whether any type of social injustice has been involved in its production

The study by the Basque Youth Observatory included, among a range of regular behaviours associated with ethical consumption, whether the people interviewed took into account, when purchasing a product, whether any type of social injustice had been committed in relation to its manufacture, such as, for example, child exploitation.

16% responded that they generally did consider that aspect of the product. 26% said they only did so sometimes and 58% said never or almost never.

As shown in the graph, awareness regarding this aspect increases with age. Only 10% of young people aged 15-19 routinely ask about the conditions in which a product was manufactured. This rate increases to 15% among those aged 20-24 and to 20% among those aged 25-29 years. In addition, this practice is more widespread among women than among men. 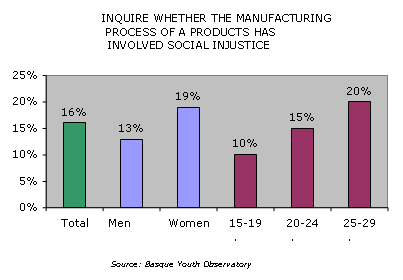 Given the low penetration of the practice associated with ethical consumption among young people, it is necessary to continue working to raise awareness that purchasing a product in a global market can mean the perpetuation of social injustices such as child exploitation.