Diagnosis of the situation of Basque Youth 2019 available in Spanish (pdf, 4 Mb)

The main purpose of this document is to improve our knowledge of people in the 15 to 29 age group residing in the Basque Country regarding the following issues: the demographic context, education, employment, emancipation and housing, health, social action and equality, participation, leisure, culture and sport.

In all cases, we collected the latest available data, since the various statistics are based on different intervals and, where relevant and possible, we used variables from other geographical regions to compare with data about Spain and the European Union. The main sources for this were the National Institute of Statistics (INE) and the European Union Statistical Office (Eurostat) respectively.

Below are some of the data included in the report:

The number of young people aged 15 to 29 has fallen significantly over the past 15 years. During that same period, life expectancy has increased and, therefore, young people account for a lower relative weight of the population as a whole. In addition, the stagnation in the number of young foreigners living in the Basque Country, late motherhood, and low fertility rates are unlikely to help alleviate this trend in the coming years.

Basque youths exceed compulsory levels of education (barely 5.4% drop out after compulsory education) and almost half of the population aged 30 to 34 (more women than men) have completed higher studies (they have attended university or higher education).

The knowledge of Basque and English has increased and, with this, the percentage of trilingual youths.

More than half of young people aged 16 to 29 are studying and, therefore, the activity rate stands below 50%. The employment figures among those who are available to work improved between 2015 and 2018, with the subsequent reduction in the unemployment rate.

Basque youths leave home, on average, at the age of 29; six years later than what is considered to be the ideal age for independence. As a result, fewer than half of the people aged 18 to 34 live independently.

The lack of financial resources and the cost of housing are the main obstacles to emancipation; in fact, taking into account the average prices of housing, a salaried person aged 18 to 34 who wants to leave home would have to dedicate more than half of their monthly salary to pay the mortgage and even more if they rented a home.

The vast majority of young people are in good health and do some healthy physical activity; in any case, one out of every five young people said they had a chronic disease and almost one in ten said they had had anxiety or depression issues in the previous month.

The rate of obesity among young people has declined, as have behaviours that involve health risks: smoking, the excessive or at-risk consumption of alcohol, the use of cannabis, and practising unsafe sex. The teen pregnancy rate remains stable and mainly affects young foreigners.

Most young people aged 16 to 29 are economically dependent on their families, which act as a buffer to curb poverty which, although a minority phenomenon, is beginning to affect young people more than the general population.

Complaints of gender-based violence have increased among young women and there has also been an increase in the number of people who consider various forms of visible and invisible violence as very serious.

Almost half of young people aged 15 to 29 belong to an association and one out of every ten says they do volunteer work. Their interest in politics has increased in recent years, and, with this, a desire to participate more actively in public affairs.

Behaviours linked to sustainability and respect for the environment have increased: three out of every ten young people are sustainable consumers, four out of ten use public transport every day and, although those who use bicycles on a daily basis are a minority, their numbers have almost tripled in eight years.

Listening to music, going out, and watching films and series are the most widespread leisure activities among young people. Practically all young people use social media on a daily basis, and more than half have been involved in some type of artistic activity over the past year.

The habit of reading has increased and the same can be said about practising sport regularly. However, there are notable differences based on sex: women read more than men but do less sport. 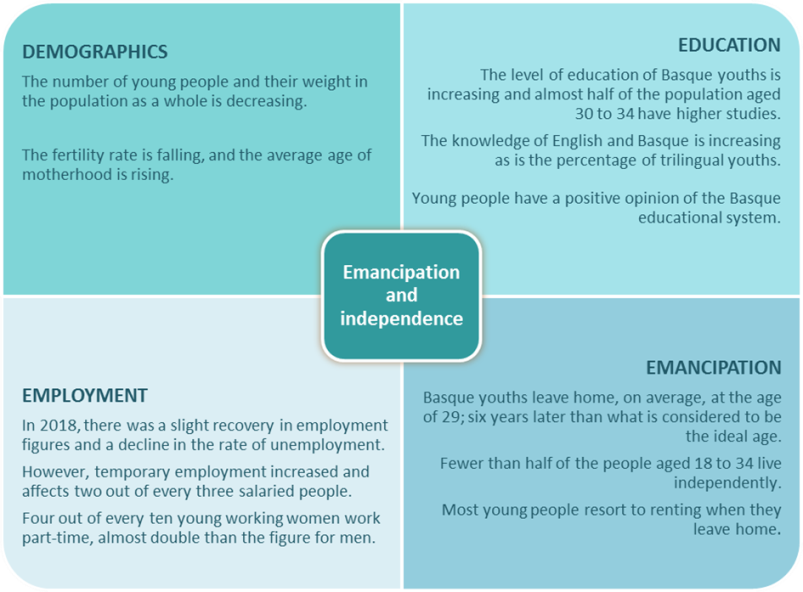 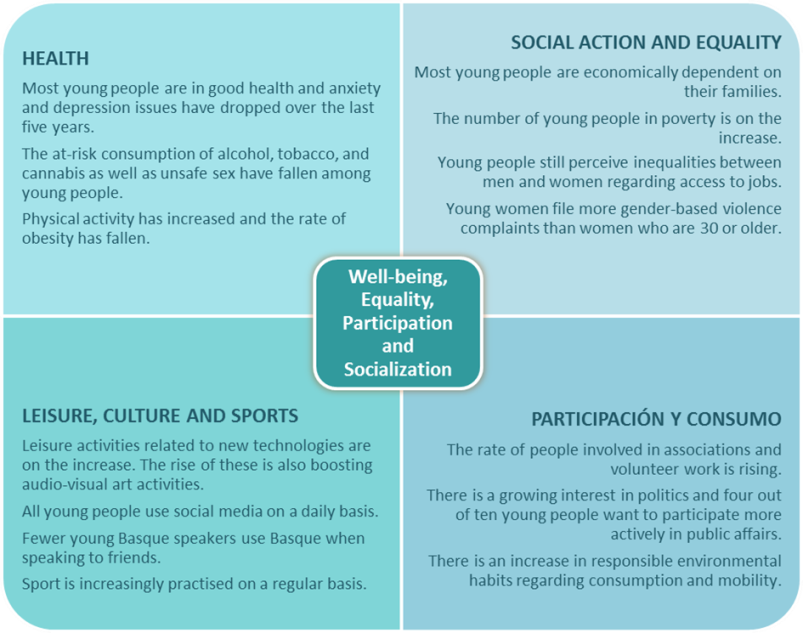