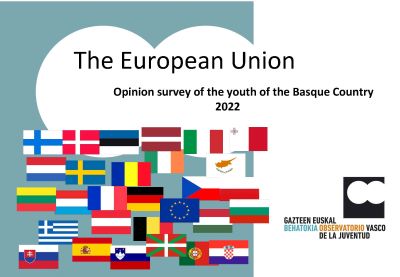 More than half of the youth of the Basque Country know that the EU is made up of 27 states (64.9%) and are interested in issues related to the European Union (59.0%) but only a third (33.8%) understand its structure and operation. According to an opinion study carried out by the Basque Youth Observatory of the Department of Equality, Justice and Social Policies of the Basque Government, less than half of young people feel attached to the EU (42.9%), but only 3.3% would be glad if it disappeared.

The opinion survey indicates that the youth of the Basque Country is below the EU youth average both in attachment to the EU and in understanding how it works.

The majority of Basque youth identify the EU with the freedom to travel, study and work in any of the member states (73.7%) and perhaps for this reason, the program aimed at youth that they know the most is Erasmus+ (92.7%), although young people who have participated in it are a minority (16.0%).

According to Agurtzane Llano, Director of Youth of the Basque Government, "youth are somewhat critical of the EU since only 26.9% are in favour of its current functioning and, when assessing its management, only the action against the covid-19 pandemic and youth work get a pass (5.3 and 5.2, out of 10, respectively).

Young people think that the EU should prioritize fighting poverty and social inequality (54.9%) and fighting climate change and protecting the environment (51.8%).

In favour of EU

Those who have participated in the discussion groups have generally expressed a positive view of Europe, and observed some criticism of the institutions. All these people agree that the European Union is necessary to preserve order and peace in Europe and many say they feel calm about belonging to it, as it suggests many advantages and provides protection to its citizens.

The positive aspects include, among others, the absence of borders, freedom and ease of movement, access to healthcare and programs such as Erasmus+, which provide an unparalleled experience.

The young people who have been consulted for the study consider that “the European Union provides security and provides rights to its citizens, but it also demands certain obligations and restricts the power of decision and manoeuvre of the member countries. In the European Parliament, very important decisions are made that affect citizens and that are mandatory for all the countries that comprise it”.

Agurtzane Llano considers that “the great influence that Europe exerts at all levels contrasts with the great ignorance about the European Union and its work. Most of those who have participated in the focus groups agree that it should have greater visibility and transparency. A clear example of this is the lack of knowledge about the European Year of Youth, since not even the young people themselves are aware of the initiative that the European Union has launched in their favour”.